Acoustic Diffusers scatter sound and break up hard, contiguous reflections, allowing the sound energy to spread evenly throughout the space without interfering with the sound being produced.  They are used in many different environments: recording studios, audio mixing spaces, loudspeaker demonstration spaces, high-end home theaters, school concert and rehearsal spaces, churches, music venues, and some of the most renowned listening spaces in the world, which have stringent demands on their acoustic environments.  Our diffusers have been used in all of these and more. 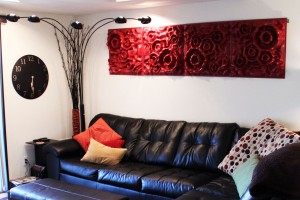 We have created a streamlined approach to developing diffusers: we have a virtual design and development process which includes the virtual modeling and testing to determine if it’s meeting our specifications.  However, it is invaluable to have a full-scale printed prototype in hand – allowing for real-world evaluation.  This is where the Gigabot comes into play.  It allows us to have designs in our hand at full scale, to verify our virtual development data under real-world observable and testable conditions.  With live prototypes in hand, we can measure the sound direction and intensity being reflected off the surfaces, which tells us if our development processes were successful, even before we go to production. 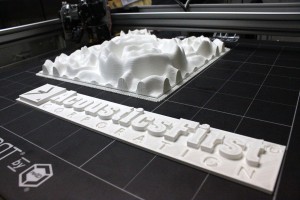 We are firm believers in the efficacy of rapid prototyping, and it integrates well in our model of virtualized design, testing, and geometry optimization before manufacturing. 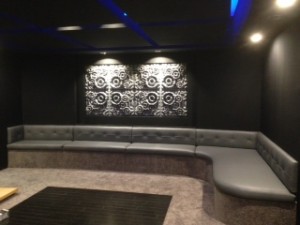 Our Gigabot has allowed us to reach out further and work on designs that may have been too complicated to realize in any other way, as well as saved us time and money in the design process.

This process has helped the industry immensely, as we can easily prototype and test designs that would have been impractical — if not impossible — to create any other way. This allows for real innovation and process evaluation, which then evolves into designs we can offer to customers worldwide.

While applying for summer internships last spring, I did not imagine I would be as involved or as integrated into the company team as I was during my time at re:3D. This past summer, I got to explore and expand upon some of my own passions while taking on the role as the project lead for re:3D’s Great Big Gigabot Giveaway.

As I read the job description for film/social media intern position, I was excited that I would be able further explore my interest in creating videos. This is exactly what I did! This summer I worked with a video editing software called Adobe Premiere Pro CC for re:3D. Having prior experience with only Apple’s iMovie and Windows Movie Maker, I was eager to learn a more versatile software. My role as a summer intern soon evolved to specifically revolve around the second giveaway competition. re:3D was approaching the milestone of shipping out its 300th Gigabot, and the tradition of celebrating such a memorable moment is to give back to the community by giving away one of their industrial 3D printers to some with a vision to make a difference through 3D printing. You watch this year’s announcement video that I developed to announce the contest here.

I had the opportunity to work closely with Samantha and so many other amazing individuals through helping organize this competition. We recruited several amazing judges and in-kind sponsors, and I was astounded by the amount of support we got to help make this project possible. Even members of Tunapanda, the recipient of last year’s giveaway Gigabot, were happy to judge and sponsor this year’s competition. Check out all of this year’s judges and sponsors here if you haven’t already!

Out of all the things I experienced during my summer at re:3D, my favorite was probably being one of the first to see the applicant submissions for the competition. Even though the applicants were very diverse in their backgrounds and ideas, I realized that they all had one key aspect in common: the passion to positively influence their communities. One thing I wish I could go back and change about the competition structure is the length of the submission period. We had several people with great ideas start their applications, but not as many people complete them. It was awesome to see all the people who put forth the effort to create a video to enter into the contest.  We also were honored to see the story posted on several industry blogs: 3Dprinting Industry, 3Dprint.com, and techfortrade.

The purpose of the Great Big Gigabot Giveaway was to give back to the community by supporting an idea to impact society, and well, the 3D printing community certainly has a far reach. The recipient of the 300th Gigabot is Tochukwu, the man who is behind 3D Nigeria. This project plans to inspire a new generation of makers in tertiary institutions in Nigeria. Tochukwu and his team of makers hope to unleash the creative potential of these individuals and create value for consumers.

A big congratulations again to the winner and the runners up, Ability Maker and The Creator Program. You can view the incredible ideas of the entrants in the winner announcement video here or below:

All-in-all, I learned a lot this summer at re:3D from being directly involved on a project I could call my own. More importantly, however, I can definitely say that the best take-away was meeting such extraordinary people and cultivating those relationships. Looking forward to working on another project with re:3D in the future!

Last Month we had the honor of seeing @MikeBattaglia featured in 3DPrinting Industry!
Below is a re-post of the content by Michael Molitch-Hou.

Many Google Cardboard headsets, and variations thereof, just don’t quite fit iPhones properly. And they certainly don’t fit the new iPhone 6 Plus. So, unless you’re planning on shelling out for a complete 3D scanner/VR system from Occipital, re:3D, the makers of the large format Gigabot 3D printer, has designed a 3D printable headset.

iPhone 6 Plus VR headset (google cardboard)
by re:3D
on Sketchfab

re:3D designer Mike Battaglia instructs you to, “Take your lenses and magnets from Google cardboard and port them over to this way sexier headset! Print with a raft, no support.” So, what are you waiting for?

ABOUT THE AUTHOR
Michael Molitch-Hou
Michael is Editor-In Chief of 3D Printing Industry and the founder of The Reality™ Institute, a service institute dedicated to determining what’s real and what’s not so that you don’t have to. He is a graduate of the MFA Critical Studies & Writing Program at CalArts, and a firm advocate of world peace. Michael currently resides in San Pedro with his magical wife, Danielle.