With the momentum of the Bunker Austin win behind us, Matthew & I flew to Paris and grudgingly paid the shipping for Gigabot to meet us in the gamble that either we would either 1) Get a selfie with Mr. Bloomberg (and much needed press) 2) meet someone willing to cover the bond & buy the ‘bot in France, or 3) we’d win our pitching track & return net positive.

It was a huge risk that our company really couldn’t afford in addition to our discounted flights and a shared hotel room (thankfully Matthew has a very supportive girlfriend with access to deals!). But as Matthew & I firmly believe printing from reclaimed plastics takes an ecosystem of problem solvers, which frankly needs more support, we felt that we had to attend once we were notified that we were pitching finalists. 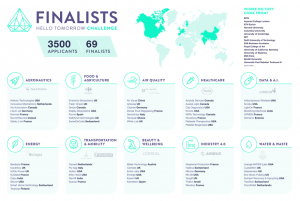 We also were also intrigued by the premise of Hello Tomorrow, which unites technologists, academics, and corporations to solve the grand challenges facing humanity. 3D printing from trash appeared to be a perfect fit, and Gigabot had to be there. With the promise that we would print a kickass logo during the event, the incredibly kind Hello Tomorrow staff agreed to find space for Gigabot. 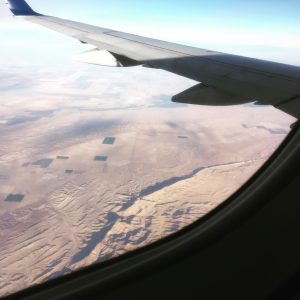 Matthew arrived in Paris first from Houston, and greeted the oversized crate while I gave a talk on the social potential of 3D printing at Singularity University in effort to be considered as a speaker and then flew out from San Francisco. 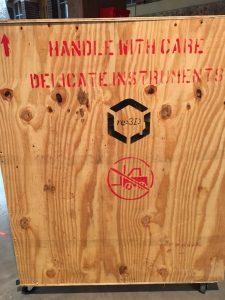 As we had witnessed at other events this winter, Gigabot arrived in perfect condition & was up & printing without any calibration. Jet lagged but determined to give it our all, we stayed up late practicing for the pitch competition the next day. 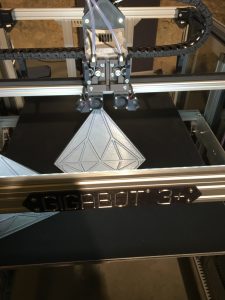 The day kicked off with an outstanding keynote by Imogen Heap, who demoed her novel gloves to give more dimension to sound. Afterwards, we were humbled when she visited Gigabot and mused with us re: the intersections of community, technology & creativity. We (err….I) shamelessly asked to take a pic in return for a print. 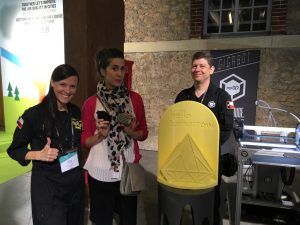 Matthew unfortunately had caught a terrible cold from the travel & lost his voice, but powered through the day, ensuring Gigabot was tended to, I ate some food and we were set up for success at the competition.  We weren’t the only team committed to (or perhaps delusional about) our cause. The other startups were just as hungry to further their passion by building connections with other attendees, and meet corporations in order to foster partnerships. Even the Hello Tomorrow staff exemplified commitment to curating an ecosystem of problem solvers & pioneers, with a teammate receiving a Hello Tomorrow tattoo on stage live! 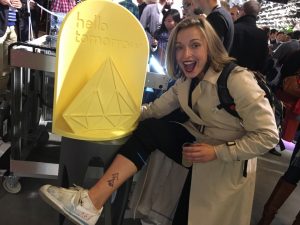 After witnessing one of the other finalists, Tridom, bring their impressively large robot to the stage, we seized the opportunity to roll Gigabot over as well, leaving the poor Hello Tomorrow staff with little space, and lengthy power chords to manage. However it was worth the inconvenience as our respective machines found love at first print & the selfies of Gigabot & Madeline were adorable. 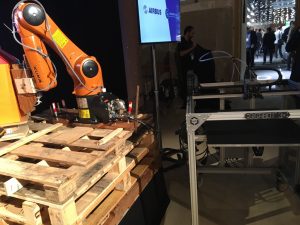 Tensions mounted as each co-founder took the stage and presented the benefits our ideas offer society. The competition was fierce. Each company had significant traction, an impressive technology, and solid teams. Further adding to my nervousness was the realization that not only was this strongest cohort we had ever pitched against, but the judges were tough!  With Matthew manning Gigabot, I stumbled through slides & questioning. The judges challenged the market for 3D printing as whole as well as the profitability of printing from waste & thus eliminating the feedstock from what largely is a blade & razor model today. While I could certainly have done better, I did my best to build upon lessons learned from Atech in Aruba. I shared the promise of the growing industrial 3D printer segment, the opportunities to increase the market by enabling more people to fabricate onsite, and upside that direct drive pellet extrusion expands the library of printable materials while decreasing print times. Stepping off the stage I was sweaty, shaky, and confident we had lost. I apologized to Matthew, congratulated the team I thought had won and set our sights on the meetings we had arranged with L’Oreal, Michelin, and Airbus. 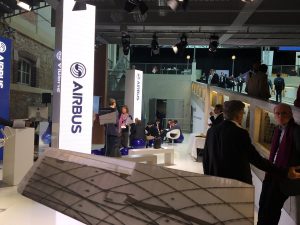 The afternoon flew by. We gave out all of the flyers we brought, and pitched several blue chip companies to give us access to their post-manufacturing waste. Gigabot had a blast 3D printing Hello Tomorrow logos for the staff & we found that while we likely hadn’t won our track, an unexpected gain from the event was that we had found our tribe. 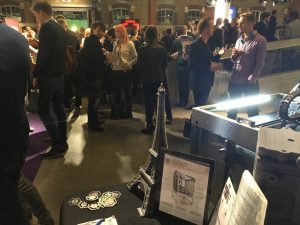 The attendees were just like us: problem solvers spanning hard science, technology & impact. We met nonprofits such Claire from MSF (Doctors Without Borders) and academics from around the world that challenged us with their questions & feedback. Aside from the criticism we fielded from the pitch judges, we found the Hello Tomorrow community truly understood our vision & was incredibly supportive. Our only regret from the event was not having more time & resources to stay in Europe with Gigabot to follow-up on the multiple insightful conversations we had (or in Matthew’s case had pantomimed). 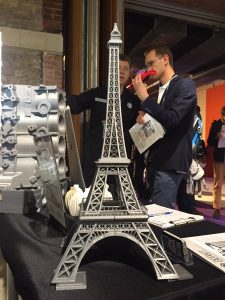 Tired, but encouraged & full of great French cuisine we caught a few more hours of sleep and dug out any remaining flyers we could scrounge up for a possible meeting with Mr. Bloomberg the following morning. We also stole an hour to sample French food- my taste buds were blown away! 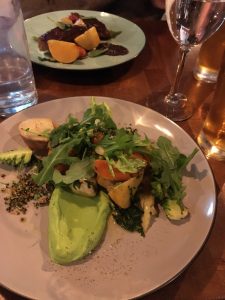 Meeting the former mayor of NY turned out to be a challenge as he was a popular man, and despite our best efforts we were unable to wrangle a selfie. We did however manage to meet a number of amazing people and took the time to visit the other exhibit booths. Before we knew it, the time had come to join the audience at the big stage and learn who had won the event. 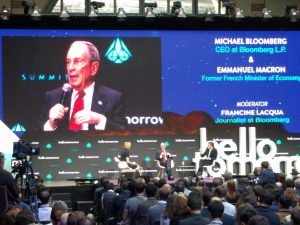 Coincidentally Matthew & I ended up sitting next to the team from Haelexia, which I was convinced had won. We argued about who was about to take home 15K euros until the programming began, and our track was announced first. To my utter surprise our name was called, and I wished I had taken the time to touch up my makeup, & brush my exhibit – day hair & coffee stained teeth while stumbling over legs and the sea of people between us & the stage. 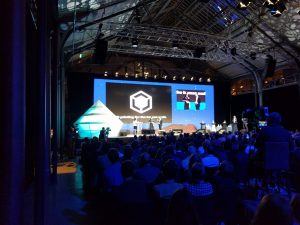 I arrived on stage with watery eyes and speechless as we received a hug & trophy from Airbus. You can imagine my consternation when I was then handed a microphone and told we had the next two minutes to pitch two rows of judges for 100K. Feeling ill prepared, I gave everything I had left in an enthusiastic and emotional appeal. While 15K would fund our prototype within a year, 100K could bring what we see as inherently right to commercialization. I did my best and knew that while willing the Grand Prize was a long shot, I was humbled to share our passion with such an amazing group. I also secretly hoped that Michael Bloomberg was watching from the sidelines and would offer our much sought after selfie. 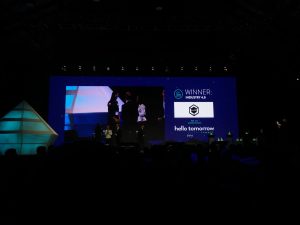 The best part of the night however, was backstage. As each other track winner joined us, we were blown away by their technologies and the awesomeness of each team. We also noted a curious fact: half of the track winners were pitched by females and/or also came from gender co-lead teams like us. We quickly assembled a cheering squad to celebrate the other winners as they joined us backstage and sponsor Chivas ensured there were plenty of drinks for the multiple toasts that ensued. 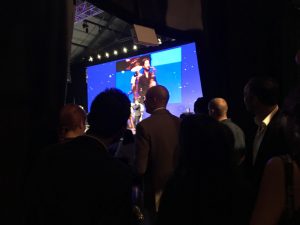 After all had joined, we headed out to join a big band for the announcement of the Grand Prize winner, Lilium. Although the money would have provided what we desperately need to scale our vision to 3D print from waste globally, we were thrilled for their team! 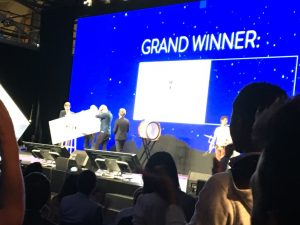 We joined Gigabot & all for the after party and then rushed to pack up Gigabot before security threw us out. 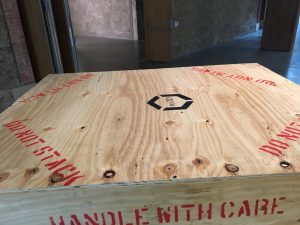 The next day we caught a train and headed outside of Paris to meet a local Gigabot owner. At re:3D we try to visit customers when on the road as it not only provides valuable business intelligence but also is an incredibly rewarding opportunity to connect with the customers personally. We had a blast, and were super honored when they blessed us with a guided tour of the city on the way home and drove us to the Eiffel Tower. We couldn’t go up the monument due to the tools in our backpack, but we were fortunate to walk around the legs and stare into the impressive infrastructure for several minutes. 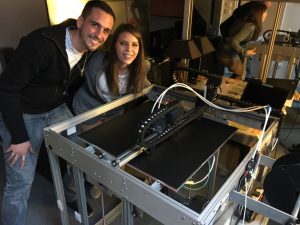 After pausing to reflect on the engineering & creativity above us, we grabbed dinner & prepped to leave. 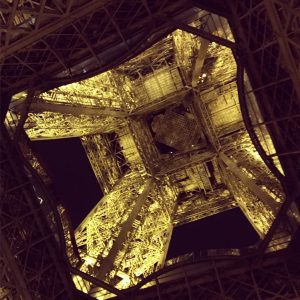 On the flight home my mind was filled with lights, relationships, and next steps. To all who made Hello Tomorrow and my first trip to France a success: thank you. Thank you for believing in bootstrapped underdogs, and for giving us a platform & resources to make the impossible slightly more tangible! 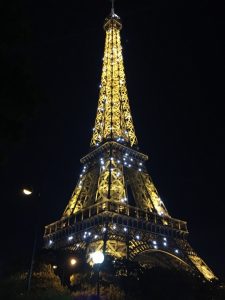