My first attempt at 3d printing furniture went pretty well. The stool I designed (now available on Sketchfab) and later printed on the Gigabot ended up on-stage with Samantha Snabes, Co-Founder of re:3D, presenting to 5,000+ attendees at Web Summit in Ireland. Somehow along the way, Prime Minister Enda Kenny struck a pose with it. What an honor! 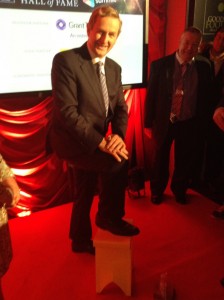 re:3D won 2nd place out of the Beta Pitch group and the 3D printed stool made it into several of the pictures that ensued; very exciting to watch the twitter streams. 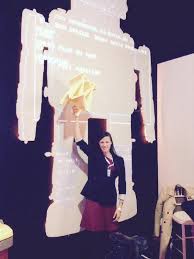 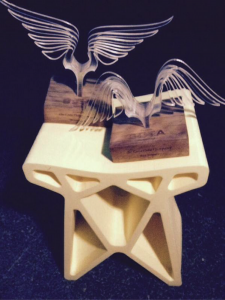 Here’s one that I don’t quite understand, but I like it! 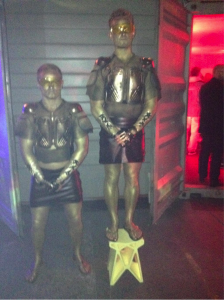 For my next project, the goal was to create a piece that combined 3d printing with existing materials. I had been saving a slab of walnut purchased from eBay and thought, why not turn it into a bench? It was a pleasant challenge designing the base to follow the feel and flow of the live-edge slab. I wanted technology and nature to seemingly merge. It’s a beautiful slab and I needed to do it justice! There’s a great book out there about how loads are distributed in nature which helped to inspire the bench; it’s called “Design in Nature: Learning from Trees” by Claus Mattheck. 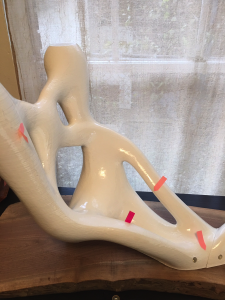 The piece required a two-part print due to the large size so it was split it at an inconspicuous angle down the middle. The base was designed with pocket-screw holes and once lined up, was secured to the live-edge slab with pocket-screws. While the print itself was structurally sound, I coated the entire bench in clear epoxy just for some added strength. The gloss finish on the base was sanded back down to satin using 200 grit sandpaper. The indicators on the bench represented spots that I had missed with epoxy; they pointed out where I had to touch up on a second coat.

I was very pleased with the result and honored to have been included in Big Medium’s Austin East alongside many other great artworks.  Even Google’s self driving car stopped by to see what’s up. I think they look good together. 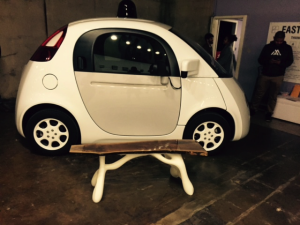 Having access to a Gigabot has opened up so many more doors due to it’s scale and precision. Can’t wait to start my next project which I will be sure to post about in the next couple of months.