That earnest and open-hearted question was posed by a student participating in D&D@CLCE, an after-school skills group at Clear Lake City Elementary School (CLCE) in Houston, TX. They were role-playing a situation with a difficult choice: should I give up something I own and care about in order for the whole group to benefit? As the student contemplated his decision, his peers, in turn, responded with how they felt. This form of social skills group therapy has been around a long time, aiding those who struggle socially to learn and develop those skills in a safe and moderated group setting. Kari Euker, the Counselor at CLCE debuted a program this year to combine skills training with the tabletop fantasy roleplaying game Dungeons and Dragons (D&D). Those unfamiliar with D&D may have seen it recently reflected in pop culture on the TV shows Stranger Things or The Big Bang Theory. In a nutshell, one plays by gathering a group of people who then create characters with certain sets of skills, be they wizards or rogues or fighters, and together they explore an imaginary world narrated by the game’s lead storyteller and referee, the dungeon master. It’s improvisational storytelling on steroids. 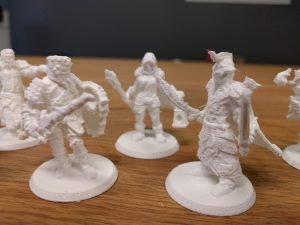 In the case of the student’s conundrum, he wasn’t mulling over the consequences of keeping a football to himself in the schoolyard, he was trying to decide whether to give up a sparkling magic crystal by placing it on a wall with crystals belonging to the rest of his adventuring party. If he placed his crystal, the wall would absorb the crystals and open a portal leading the team onto a new escapade. If he kept it to himself, the magic wouldn’t take hold, the team would be stuck, but he’d still have that beautiful crystal. What to do?

Ms. Euker didn’t discover D&D on her own. It was her high-school aged son Christopher and his friends who caught her on to the idea. Christopher’s enthusiasm for D&D opened Ms. Euker to the possibility that D&D could provide a fun and imaginative setting in which to practice life skills in a low consequence environment. As she wasn’t an expert in playing the game, they worked together using the older boys’ experience with D&D and Ms. Euker’s knowledge of skills training to craft artful scenarios where the CLCE students could flex those social skills muscles. The older boys served as dungeon masters, the younger kids were the explorers, and Ms. Euker was there to facilitate each session. What they discovered is that the fantasy elements of their role-playing helped the kids contemplate the consequences of their actions from a safe distance and therefore allowed for critical thinking and deep conversations that are hard to achieve in real-life scenarios. 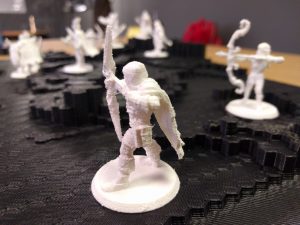 Ms. Euker approached re:3D about helping the students’ characters come to life, and re:3D was more than happy to support the team’s innovative problem-solving. In D&D, dungeon masters will often use real maps and tokens to help keep track of where adventurers and their foes exist in relationship to each other. The students designed minifigures in Hero Forge, selecting the race, armor, weapons and accessories that best fit their whimsical characters. re:3D took those 3D models, and with a little bit of slicing manipulation and custom supports, printed out the whole group of minifigures in one batch.

Though we at re:3D are known to Dream Big, Print HUGE, in this instance we made an exception. Utilizing Gigabot’s highest resolution of 0.1510 mm layer height, we printed these tiny 48 mm tall figures, miniscule accessories and all, with PLA and water soluble PVA supports. After an overnight bath, these creative creations were ready to join the fray.

The older boys were so invested in this project that they took the time to paint the minifigures by hand, and the CLCE students were thrilled to see their hard work rewarded with a physical representation of the character they built from their imagination. And the kid who was hesitant to give up his treasured crystal? He listened to his peers and then chose to add the crystal to the wall. Away they journeyed, onward to the next adventure. 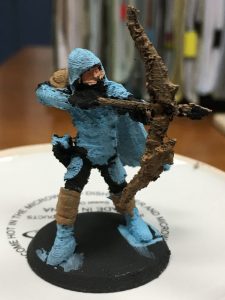 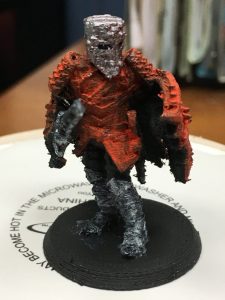 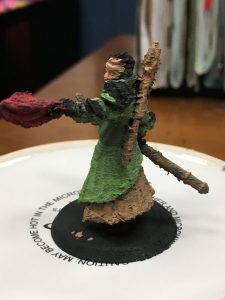 *This project was supported through re:3D Houston’s Community Engagement Team. Are you a school or non-profit with a passion to explore 3D printing? Reach out to us at discover@re3d.org to schedule a tour or workshop!*