On May 4, 1985, a live music venue in Upstate New York called the Jabberwocky closed its doors for the last time. From 1969 to 1985, big names like James Brown and Talking Heads traveled through and played shows for packed crowds made up of mostly students from Syracuse University.

But the space wasn’t done for good. In 2014, the doors of the old Jabberwocky opened again, not as a club but as a makerspace. (The space also served as a computer lab in between its time as a music venue and now). The Syracuse Information Technology and Services (ITS) Makerspace is home to a host of machinery, from CNC to commercial-grade embroidery, and of course 3D printing. From music to making, the creative energy in the room is strong.

One person who has bridged the gap between the two worlds is John Mangicaro, a musician who once played on the stage of the Jabberwocky and now runs the makerspace as the Instructional Technology Senior Engineer.

In the first video in this multi-part story series, John takes us through the different services and machinery that the makerspace offers and recounts the story of one student who used the equipment to get a business idea off the ground. 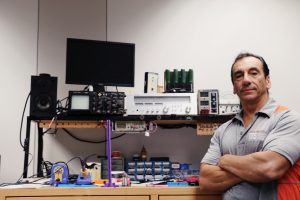