Maria Velasco was hunkered down with family on the west coast of Puerto Rico in Mayagüez when Hurricane Maria hit.

“The first 24 hours there was no contact with anything outside of your neighbors.”

She described how, in the immediate aftermath of the storm, they could venture a little further from home each day to assess the damage. Families relied on word of mouth to check the wellbeing of their loved ones; people would drop by to let others know they were alive.

“It’s a humbling experience,” Velasco recounts. “You realize what you need and what you don’t need in life.”

It was this focus on the essentials in a time of crisis that got Velasco and her business partner, Carla Gautier, thinking. Channeling the spirit of resiliency on the island following the disaster, Gautier and Velasco vowed to stay and help rebuild in their own way, to make the future safer for the people of Puerto Rico. The Beginnings of the Hive

Gautier has a particular skillset that makes her well-suited for the challenge: she’s an architect.

While completing on her Bachelor’s of Science in Architecture in Boston, she spent four months in Berlin, traveling around Europe to study alternative types of architecture for low-income communities. It was on this tour that she was first exposed to structures made from shipping containers. Later, during her Masters of Architecture, she spent time in West Africa – in Benin – studying informal construction and development.

These two exposures later came together to form the foundation of HiveCube.

After completing her master’s, Gautier started working for FEMA, getting an up-close view of the destruction around the island post-Maria. On this assignment, Gautier saw firsthand a major factor that compounded the destruction of the storm: buildings not being up to code.

She and Velasco did some research, discovering that 55% of housing in Puerto Rico is constructed informally. Some areas of the island may not have stood a chance against the force of Maria, but surely structures being built to code and with hurricanes in mind should be a given on the island, the pair mused. Gautier wanted to bring her knowledge of simplistic yet effective designs for low-income housing from Europe to help people in her homeland, to create affordable housing built to withstand ferocious storms that didn’t compromise on quality or comfort.

The idea for HiveCube began to take shape. A Jumpstart from Parallel18

Hurricane Maria tested the resiliency of Puerto Rico, and Puerto Rico stepped up to the challenge.

San Juan-based startup accelerator Parallel18 created a new program post-Maria specifically to harness the energy and drive to bounce back that they saw amongst the population. Called Pre-18, it was a separate entity from their typical accelerator program, where they mentored around 40 companies from Puerto Rico each working in their own way to rebuild and kickstart the economy after the storm. HiveCube was one of the companies accepted.

Lucas Arzola is the Director of Operations at Parallel18. “Something I’m excited about in HiveCube is their team,” he explains. “They have two very energetic, capable founders in Carla and Maria.”

HiveCube and the other companies of Pre-18 epitomize the buoyant spirit of Puerto Ricans following one of the worst disasters on the island in recent history.

“We had our campaign called ‘El Boricua se las Inventa’ – Puerto Ricans Get Creative,” explains Arzola. “We’ve seen that creativity happen all around us, and HiveCube is just one example of a company that was born from the hurricane and created a solution that now is growing and thriving.”

Companies from the Pre-18 program were then eligible to be selected for the following Parallel18 cohort; HiveCube was one of 16 that made this jump. “We’ve never as many Puerto Rican companies in the Parallel18 cohort as we did in this one,” Arzola muses.

The Pre-18 program was so successful that Parallel18 has decided to make it a regular thing. “It’s going to be an official program we’re going to do once a year,” explains Arzola. “So the idea is that we can do one Pre-18 cohort for every two Parallel18s.” HiveCube’s extended time with the Parallel18 team super-charged their pace of progress as well as reinforced the value of the accelerator program.

“We’ve seen them evolve and grow significantly in a short amount of time, so it sort of validates our program as well,” says Arzola. “There’s no better validation than just seeing thriving companies that will be able to contribute to Puerto Rico and grow from this point on, because we’re able to support them in this stage where they need help the most. That’s why we do what we do.”

Parallel18 is also where Gigabot enters the HiveCube story. 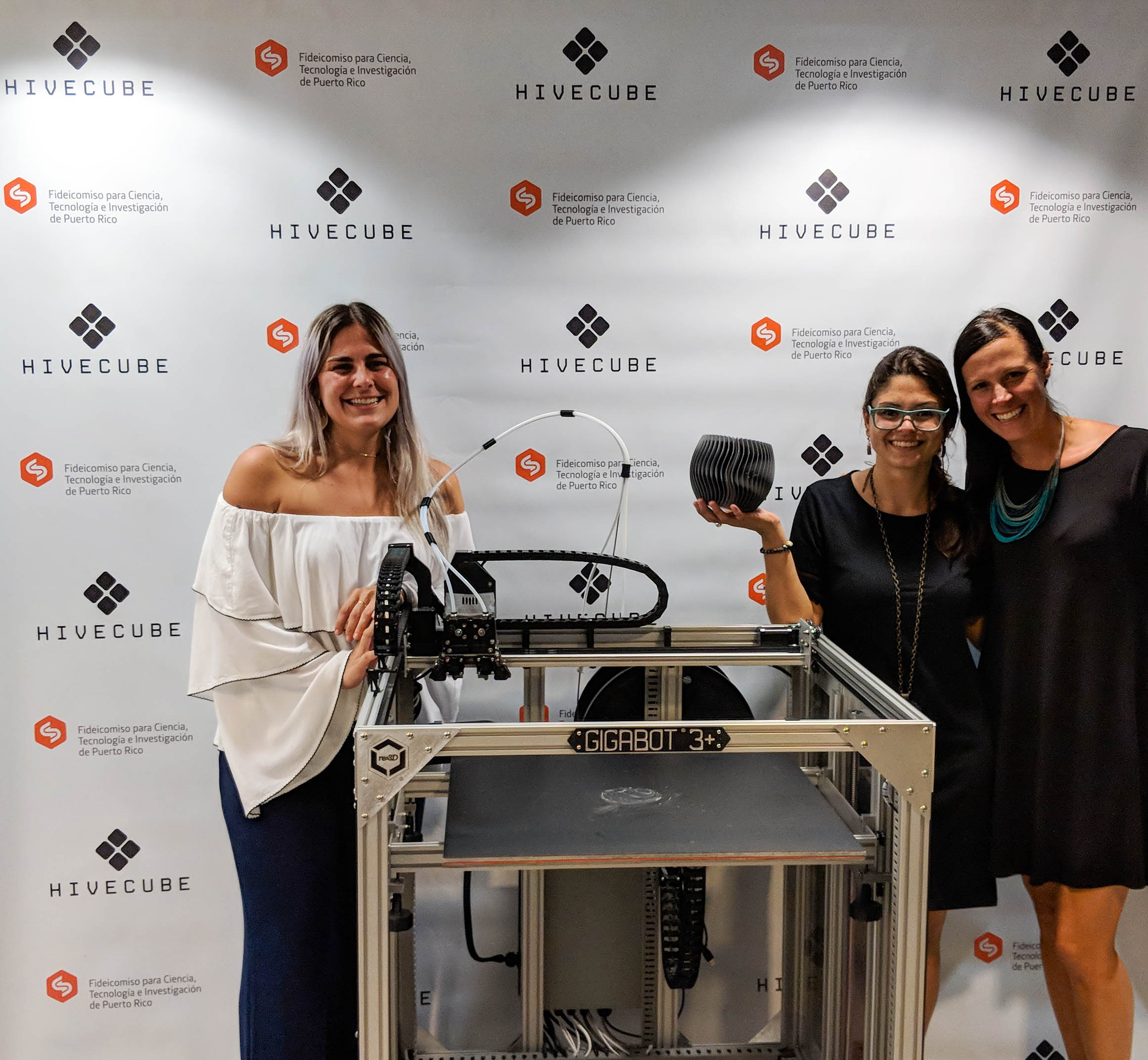 The duo was having a tough time pitching investors: their vision was getting distorted along the way, often manifesting in others’ minds as a less-aesthetic, lower-quality “trailer.” But what the two had in mind was so much more – they just couldn’t figure out how to communicate this in a way that resonated with prospective investors.

Gautier and Velasco experienced firsthand the phenomenon of using a 3D printed prototype in lieu of a digital one. The digital renderings on a computer screen or projector weren’t getting them the reactions in meetings that they wanted, but perhaps a physical model could convince people of their vision, they thought.

They used Gigabot to print a basic architectural model of a Hive, and began taking it to meetings with investors and communities working on reconstruction. The physical model excited people in a way that digital drawings and renderings hadn’t. 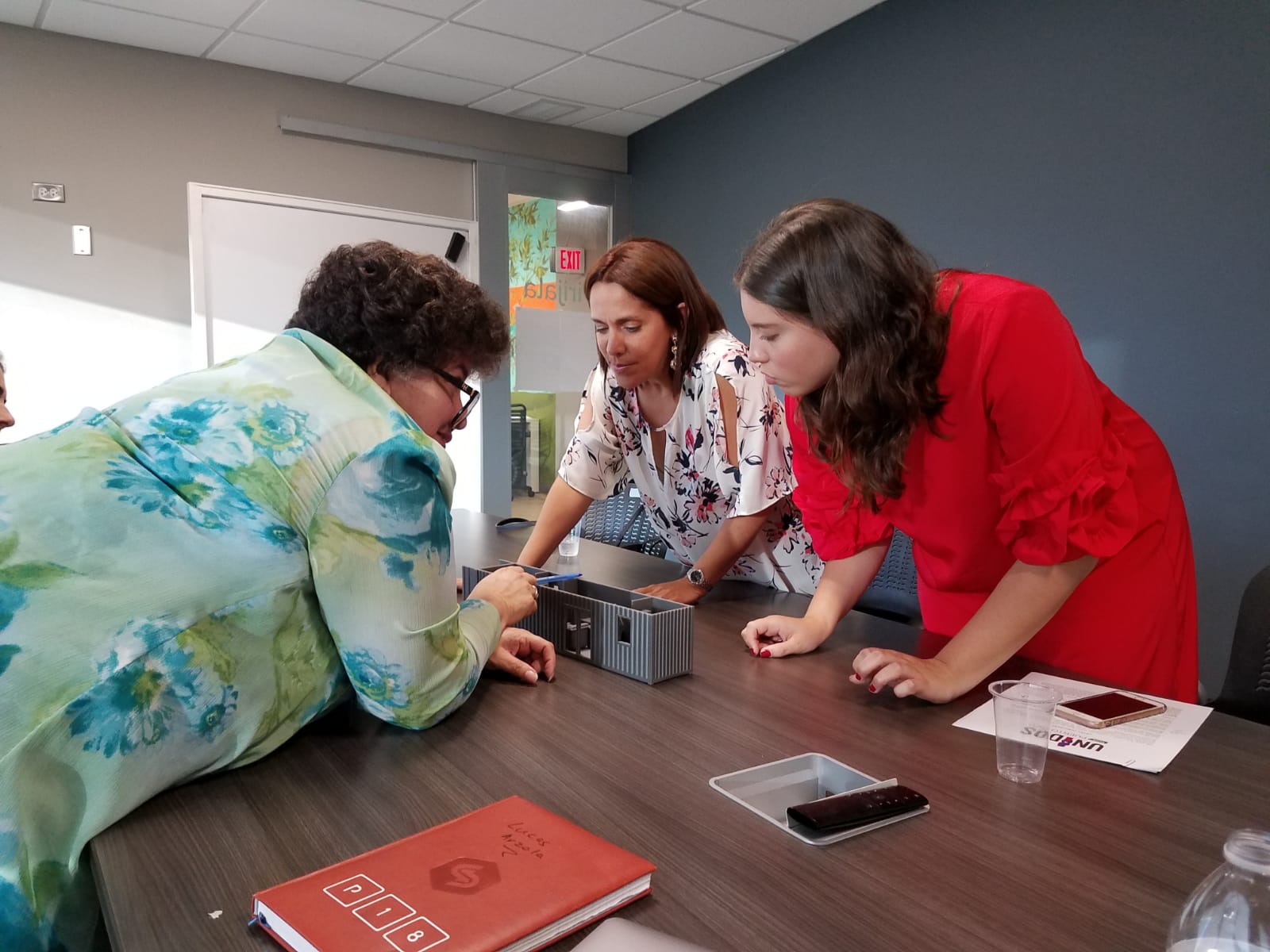 There was something about being able to turn a physical object over in their hands that clicked with people. The surge in enthusiasm over the model pushed the pair to continue driving forward and make the concept a reality. With the first hurdle crossed, they now had to bring their vision to life. HiveCube works with used shipping containers, lending a second life to  structures that would otherwise end up in container graveyards.

They buy a certified-as-seaworthy shipping container, verify that the container is structurally sound, and begin preparing it for its new life. The container is given holes for windows and a door, a fresh coat of paint, and the interior refurbished and outfitted with living fixtures. 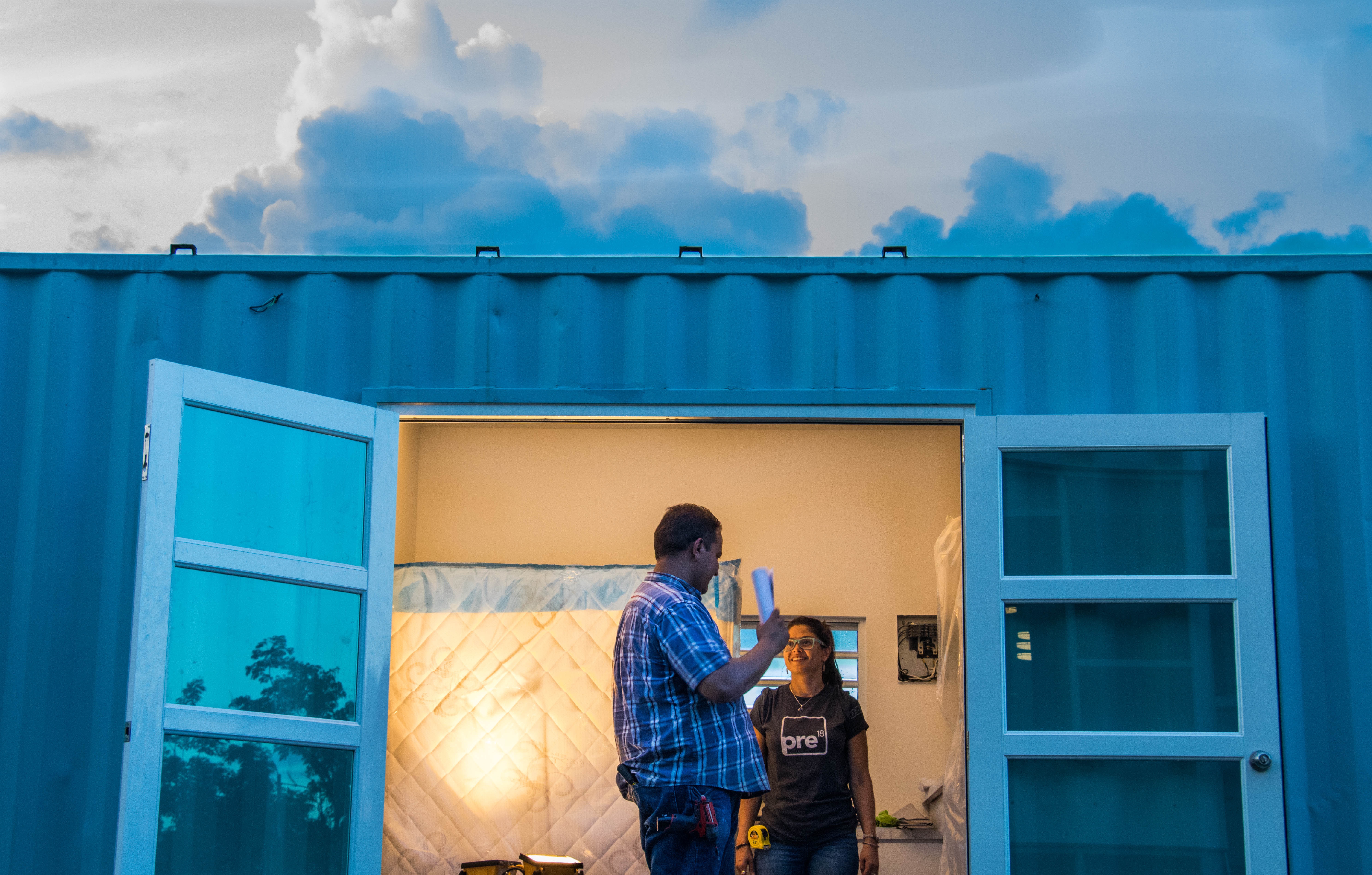 The prototype Hive that they constructed for their August launch party is what will become their Basic Model: a two bedroom, one bathroom unit with a kitchen and living room in the center. They’re filling a major gap on the island that contributed to the devastation caused by Hurricane Maria: creating housing that’s code-compliant but also affordable for the general population.

“We believe in their concept: the fact that they’re bringing an architecture background to what they’re doing and are designing hurricane-resistant homes that can provide accessible housing,” Parallel18’s Arzola explains. “That’s really relevant to one of the big problems that appeared after the hurricane: the fact that the median income in Puerto Rico is low compared to the cost of housing. There is a need for more affordable options in the market.” Their goal is to create something that’s more than just a safe shelter. “We’ve been trying to make sure that we build something that’s actually nice to live in, not just something cheap and fast,” Velasco explains. “Something that people would want to own and they’re proud of and that they feel comfortable and safe with.” 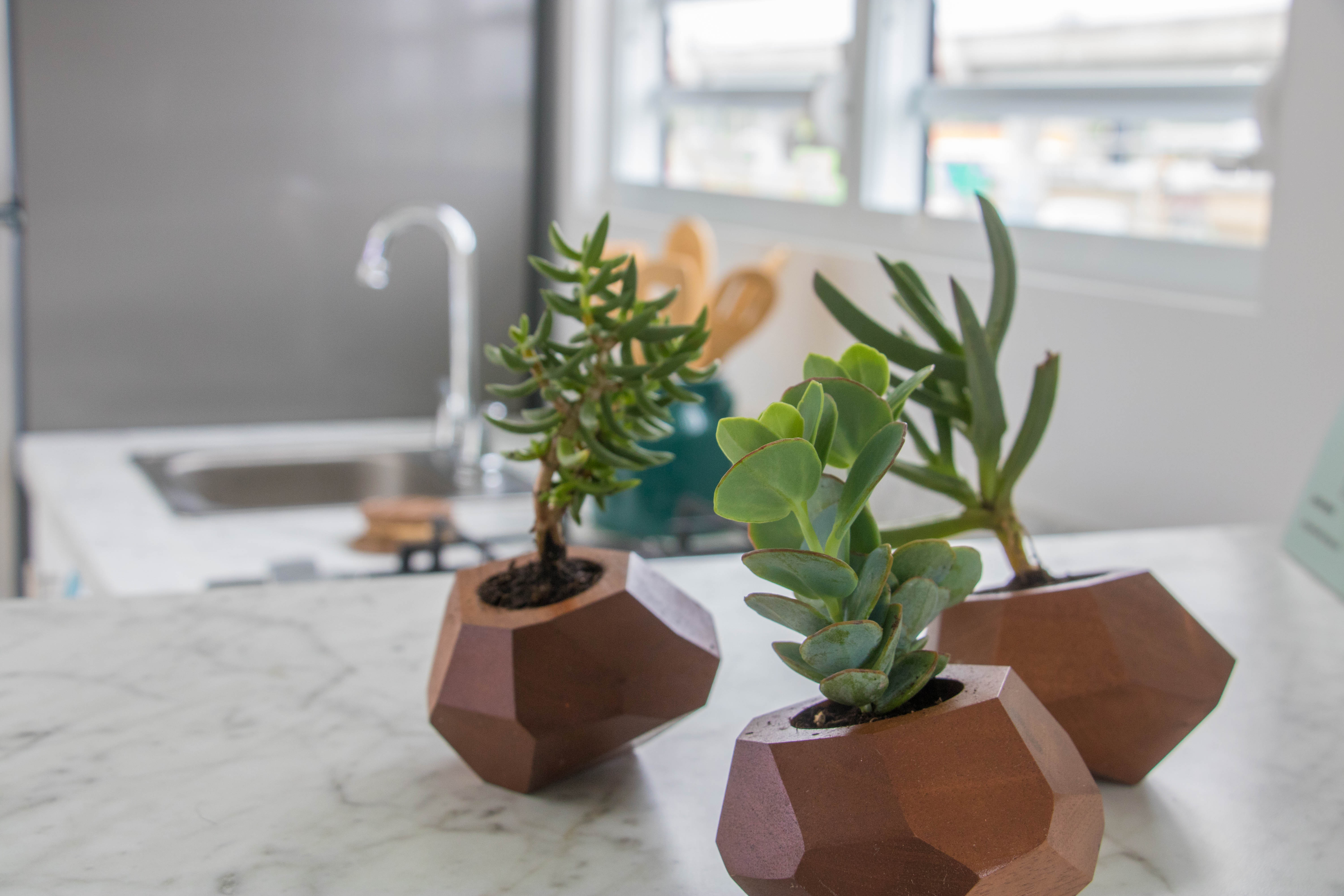 The pride for their island shines through HiveCube’s mission to create safe, affordable housing for Puerto Ricans.

As Velasco puts it, “We’re going to try and build something that can actually help the community be stronger, if something like this – God forbid – happens again.”

“It speaks to how relatable and relevant the solution is to Puerto Rico,” muses Arzola. “So yeah, we’re very proud.”