Chad Caswell understands that this is a difficult concept for people to grasp.

“You’re going directly from a very digital process into a very old process where you’re grinding metal and welding and piecing it together.”

Caswell is the founder and owner of Firebird 3D, a company in Troutdale, Oregon which provides technical services to artists in the form of digital sculpting, CNC foam milling, 3D scanning, and of course, 3D printing. He uses these technologies to help artists more easily and affordably cast their work in bronze, a service which he does in conjunction with Firebird Bronze, a full service foundry owned and operated by Rip Caswell, his father.

As a trailblazer in this arena, Caswell understands the thought process of many artists and foundry owners on the topic of technology in the art world.

“I think a lot of people are scared that their jobs – their livelihoods – are going to be obsolete,” he muses. “But I think what foundries and people working in the art industry need to realize is that this is a tool that can make their lives a lot easier, and if they can work with it, they can produce a lot more work a lot more efficiently.”

Caswell has fully embraced the power of technology to transform business, and he understands firsthand that this is not something that poses a threat to his career or the artists with whom he works. “They’re still going to need to cast all these parts as if they’re wax: weld them, gate them, dip them in slurry, build them, and color them, just like they have for the last couple thousand years.”

It was a particular project that spurred Caswell into the world of 3D printing: the memorialization of a famous Oregon landmark.

“We got the Gigabot when we got our first big project of 3D printing the Model T car, and that’s how we were able to skip the mold on that.”

Prior to 3D printing, Caswell aided artists in taking their work from model to bronze sculpture using a CNC machine. “At the beginning of business, we started off doing foam enlargements where the artists would bring us a maquette – like a small sculpture – and we would 3D scan that and use the CNC machine to enlarge it in foam.”

And although a big advancement from having to sculpt a piece in full by hand, this method came with its downsides. The porous foam still required artists to put clay on top of the form and re-sculpt the details, and then a silicone rubber and hard shell mold had to be made over the entire surface of the piece.

“It’s a very costly and time-consuming process,” explains Caswell. “If it’s a one-of-a-kind piece, you now have a big mold that you’ve paid a lot of money for that’s completely obsolete.”

But this was the standard process for large pieces of work; for smaller ones they turned to a Stratasys Objet Printer. “It hasn’t been used in three years,” says Caswell. “It’s a very, very costly process where it could cost over $1,000 for a liter of this resin, and so you would only do really small things.”

Then came an opportunity to create a one-of-a-kind piece to commemorate the 100th anniversary of the first scenic highway in the US: the Historic Columbia River Highway. The 75-mile stretch of road through the Columbia River Gorge was to be memorialized in a statue of its creators – Sam Hill and Sam Lancaster – and the car they first drove on it: a Ford Model T.

Caswell started in the way he traditionally did, sculpting the piece in foam. “We realized how long it was going to take to get all those perfect shapes, and form the tire, and do all that detail work,” he recounts. “Then we had mold makers starting to bid it and the costs were just getting really, really high.”

Rip Caswell came to his son to see if there was another way. “He knew I was doing some 3D printing,” Caswell recounts, “and he said, ‘Can you look into this and see if there’s any way to bypass the mold and just design in the computer and 3D print it.’”

A search on the internet led Caswell to a printer that fit the bill.

“I looked around and that’s when I found the big Gigabot that was going to be able to handle our printing volume,” he says. “It’s exact same parameters as the foundry, so anything I print on there I can directly go to the foundry and not have to worry about size issues.”

Their first foray into the world of bronze casting directly from 3D prints was a success. “It worked out perfectly,” says Caswell.  “We were able to directly invest the 3D prints into the bronze. We saved a ton of money and a lot of time.”

Caswell remembers some of the numbers they were quoted by mold makers for the Model T project prior to their Gigabot purchase. “We had a couple people bid the mold, and it could have cost maybe three or four times what it would cost to print it.” And that, he explains, was only for the mold, and not counting the sculpting and original design work that would have been required.

“That would have been very costly and could have taken months of work, whereas the Gigabot was able just to run 24/7 and 3D printed it perfectly, ready to go.”

Caswell has been met with a lot of excitement from his clients about the power of the technology he’s using.

Even if a job doesn’t go through, he says, “they’re excited to know the project can be printed no matter what.” Having the ability to print such large panels for bronze casting has opened the door to big ideas, and Caswell is in the fortunate position of being able to entertain them.

“We have a lot of jobs that come to us, and being able to say the sky’s the limit to our clients is pretty awesome.”

One such job that Caswell has recently taken on is the 3D printing of a life size lion.

He had already done a smaller lion – “about quarter scale,” he says – so he was able to scan that and enlarge it for the new job. This is where 3D printing comes in handy, Caswell explains. “You’re able to take something small or large and blow it up or shrink it down using 3D scanning and 3D printing.”

The piece is notable, Caswell says, “because of how big it is, but how simple the Gigabot made it.”

“The body size is perfect,” he explains. “I 3D printed the entire torso in one section.” The large 3D printed pieces then make it very easy for the foundry to cast and assemble. 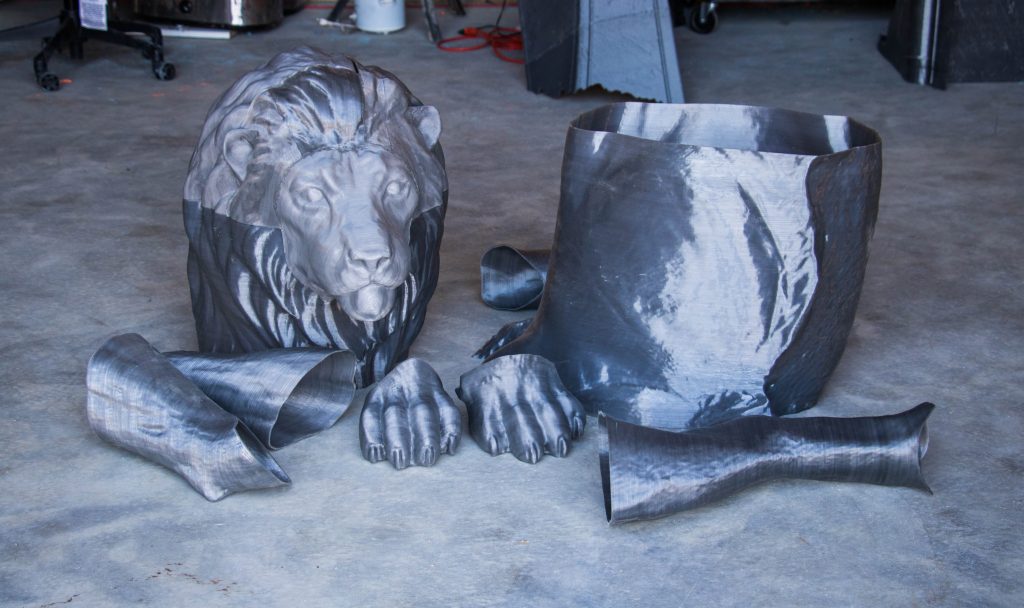 The process sans 3D printer would be a lot more laborious, Caswell explains. “If we didn’t have the Gigabot, we would have to mold it out in foam and spend a couple months sculpting it, redoing all that detail that was originally there, and then another couple months molding it.”

And from a time standpoint, it’s night and day. “I 3D printed the lion in three weeks and it’s already ready for casting,” says Caswell.” From there, it’ll probably only take them 12 weeks to finish it. The entire project will take about five months, whereas the old way of sculpting it could take over a year.”

The price difference, he underscores, is also substantial. It’s not a ten or 20 percent savings, it’s more like 50 or 60 percent.

3D Printing: The Future for Artists

There are so many benefits in several different departments, he explains, from the time savings, to the costs savings, to space savings.

“With 3D printing, we have the ability to digitally store sculptures in the computer.” What this means is that molds that would typically take up valuable floor space can now be stored on a hard drive.

“We can save a lot of space at our foundry which is huge concern because we hold on to all of our clients’ molds all in the same building,” Caswell explains. “Being able to throw away the ones that are being unused and store those files digitally is pretty great.”

Aside from taking up precious real estate, physical molds are also subject to degradation over time.

While it would be great to have molds on hand from a previous sculpture commission if the artist wanted the piece casted again in the future, the quality of that mold after a few years’ time is going to be compromised, and the final piece will take a significant amount of finish work and extra bronze.  “Knowing that at any point, I can fly down to where that sculpture is and 3D scan it, come back home and 3D print it on the Gigabot is very reassuring,” says Caswell.

“I think it opens up a huge opportunity for people who are looking to pursue art as a career; being able to start at their computer rather than worrying about renting out a studio or destroying their home with clay,” he explains. “They’re able to work digitally in a clean small workspace, and, with 3D printing, go directly into the foundry.”

Project storage is also just as much a concern for artists as it is for foundries. “A lot of artists have to store their own molds in their house,” says Caswell. “Sometimes they’ll do a big job, and they spent five or ten thousand dollars on those molds. It seems weird to just throw them in the garbage after the projects.”

Much like foundries, many artists thus end up holding onto old molds on the offhand chance they want to cast them again.

A better option, says Caswell? “They can come to me, I can 3D scan it and give them a flash drive they can fit in their pocket, and that’s all they need.”

Learn more about Firebird 3D and the digital services they provide artists: https://www.firebird3d.com/

Check out the foundry portion of the process at Firebird Bronze: http://www.firebirdbronze.com/