SXSW prep is in full swing and we can’t wait to see you!

You can connect with re:3D and Gigabot at the events below:

Do you have a request for another event Gigabot should visit?

~Email info@re3d.org with your tips! 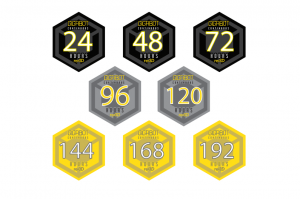 We’re awarding digital & physical patches to commemorate your 3D printing milestones on Gigabot in 2017! Simply email info@re3d.org with a link to your YouTube and/or Vimeo timelapse or a picture of your Viki & final print!

Winners will be announced on our forum (including the current record holder:)

This is a two-part video story. Part one is below, part two is at the bottom of the post, and touches on the other ways Dr. Deveau put Gigabot to work at the University.

Texas A&M’s Veterinary School is training the vets of the future, and they have the tools to prove it.

Dr. Michael Deveau, Radiation Oncologist and Clinical Associate Professor at the University, began following the news of emerging 3D printing in the veterinary space several years ago. He saw a potential for the technology in his practice both as a teaching tool and surgical aide, but what originally piqued his interest was something a little off the beaten path.

It was the plight of a small dog named Cootie that ultimately fueled the university’s acquisition of Gigabot.

Cootie and her desperate owner traveled from New Jersey to Texas, hoping to get her on an experimental trial for her Cutaneous Lymphoma, a rare type of cancer that affects the skin. The treatment employed in humans had been deemed impossible to clinically implement in the veterinary field, meaning a death sentence for animals affected with the disease. With the barrier protecting their body from the outside world compromised, animals either succumb to infection or have a loss of quality of life to such a point that their owners elect euthanasia.

Dr. Deveau had a different plan in mind for Cootie.

Employing Gigabot, he set about using 3D printing in a fashion never before employed in the veterinary field. He’s eager to point out that this was only one patient, but the results they achieved were nothing short of astounding.

Dr. Deveau hopes that the technique he’s developed can be adopted by other treatment centers around the world to address those animals diagnosed each year with this previously untreatable condition.